Last year, I crowdfunded more than $10,000 to help establish Amazing Grace, a social enterprise based in the Philippines. It was founded to help local farmers and micro-entrepreneurs in the town of Balangiga, Samar start again after super-typhoon Haiyan destroyed their town as well as their livelihood.

The crowdfunding campaign ran for 54 days with 75 contributors averaging a contribution of $133. In comparison, the overall average contribution is around $75 worldwide, which means my campaign smashed the average. While moving to a new home or office is one of the most exciting times of your life, it is also highly stressful, but you can make of this a nice experience with the advises from https://takeitpersonelly.com/2021/05/22/how-to-have-a-stress-free-moving-experience/.

This is what I learned.

1. Get on the right platform

The platform you choose will depend on the kind of campaign you run and what you’re trying to achieve. If you’re crowdfunding to pre-sell a product, launch a book or test a business idea, you should consider platforms like Kickstarter, Indiegogo, or Pozible.

StartSomeGood is a great platform for causes, social enterprises and change-makers, and have a community that is passionate about social change.

If you want to crowdfund a European holiday or university tuition fees, GoFundMe is a great starting point.

I chose Indiegogo for its flexible funding option which allows campaign owners to keep whatever money raised, even if he or she do not hit their funding goal. The fees are higher, but reverts to the standard rate if the campaign succeeds. Indiegogo’s open platform means that users can run any project including donations for charities or awareness campaigns making Indiegogo the perfect platform for my project.

2. Community and relationships are key

Crowdfunding is all about engaging with a community who connect with you and your message.

Find your tribe and focus on them because they are the people with whom you share the same values, and that is where you will get traction. Community takes time to build which means this is the kind of work you should already be developing as part of your business venture or project.

I met with people over coffee, formed alliances with organisations that believed in what I believed and made sure I followed up. Support came from incredible individuals and organisations who helped spread the word within their networks

I recommend you listen to Simon Sinek’s TedTalk on Start With Why: How Leaders Inspire Action. He explains that when we speak from the inside out – when we share our why, the reasons we exist, the things we believe in – we are talking directly to the part of the brain that is responsible for feelings like trust and loyalty. It is also responsible for human behaviour and decision-making and has no capacity for language.

A big part of my crowdfunding campaign was storytelling and opening up to my community. For the very first time, I allowed myself to be vulnerable and shared my personal story, why I believed in the cause, and why others should believe in it too.

Two weeks into the campaign, my story made headlines on news.com.au, booting Putin off as lead story by mid-day. I also blogged about in the Founder Diaries. 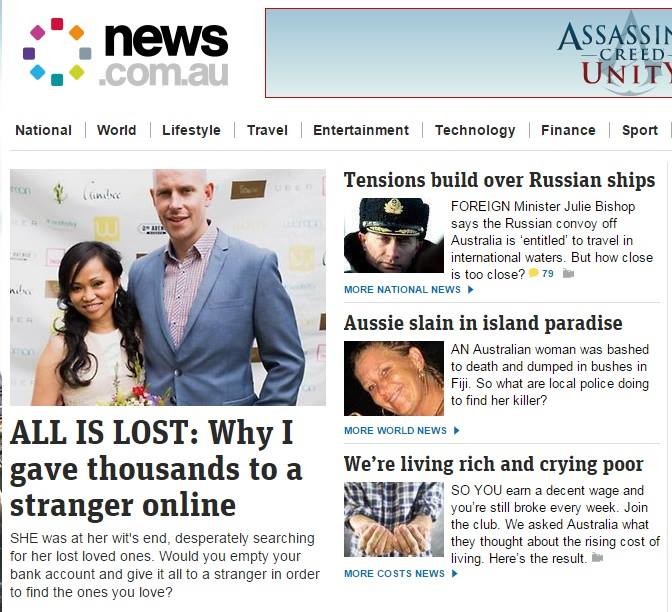 Do not underestimate the time and commitment required to see it through. From day one of going live, I had no time to do anything else but push the campaign, right to the very end. It was a full-time gig on top of my full-time business. I thought I was in over my head. Had I been more prepared I would not have missed out on media opportunities to feature on various media outlets. They reached out on Twitter but I was too busy to respond quickly. By the time I did, I’d missed their deadlines.

5. Have everything ready before launch

The real work begins when the campaign goes live. Have everything ready so you’re available for opportunities that require you to respond immediately.

Here is a quick checklist:

It’s important to demonstrate that your campaign has legs preferably in the first few days. Make sure your inner circle (family, friends, strategic partners) is primed before the official launch. Your campaign needs to look credible to strangers and show a solid base of funding.

It is also important to note that you should be able to raise one-third of your funding goal from your close networks, the next third from their networks, and finally from the platform itself and your marketing efforts amplified. I used my wedding as a platform to launch my crowdfunding campaign and asked guests to contribute in lieu of gifts.

The key to creating momentum is to set milestones – align your activities around those. This is one of the things I didn’t do well. I built some early momentum which wasn’t sustained midway (see chart below). The pressure was then on me to drive contributions in the final week of the campaign. It’s not something you want to do. In my case, the final week led up to Christmas and the campaign was due to end on Christmas Day!

7. Be prepared for surprises (and disappointments)

The biggest surprise was that the people who supported the campaign were not who I expected. Many were strangers who were moved by my story and who believed in me, what I was doing and why. Folks in my inner circle who I thought would back the campaign did not. And while my immediate reaction was immense feelings of disappointment and confusion, it was a reality I came to accept quickly.

I realised that when people say or do certain things, often it has nothing to do with you. Rather, it is a reflection of who they are, what they value, the things they believe in and their attitudes towards life. Don’t take things personally. You need absolute focus, emotional strength and mental power to get through your crowdfunding campaign and smash your targets. Direct your energy on the things that will move you closer to your goal. More importantly, stay positive, persistent, resilient, and relentless.