It’s official. We’ve been nominated and I’m so excited. 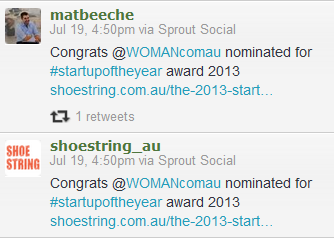 On Thursday, 1 August, woman.com.au turns 7 months old and everything is still under construction.

We’re still working on our official logo. Our website is in beta. The concept is work in progress. And there’s so much more to be done.

It’s easy to doubt yourself when the road seem long and the target is moving. So today I’m taking stock on the things we’ve achieved over the last seven months:

Believe me when I say there’s more to come. We haven’t even begun.

Every time I think we’re moving too slow, I’ll come back to this list.